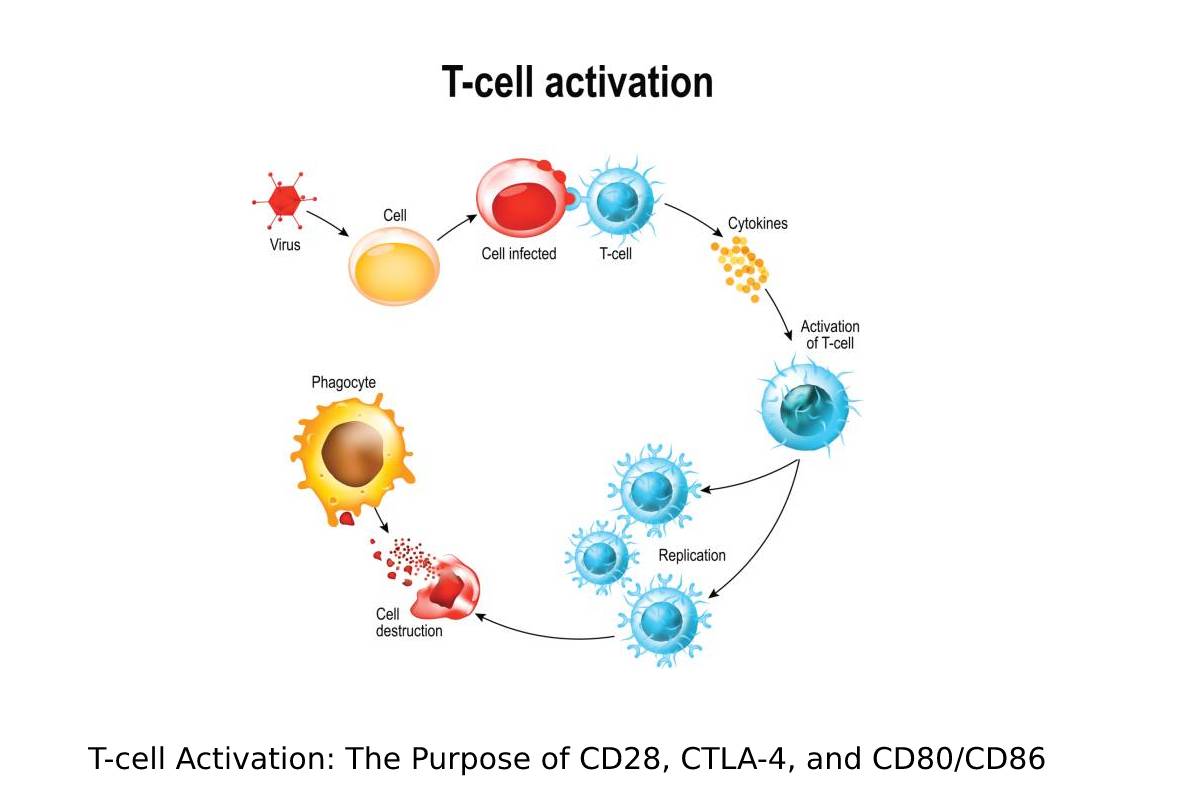 T cells are produced in the thymus and are trained to recognize only one foreign particle (antigen). They circulate throughout the body after leaving the thymus until they recognize their antigen on the surface of antigen-presenting cells (APCs). The TCR on CD4+ helper T cells and CD8+ cytotoxic T cells bind to the antigen on the surface of the APC, which is contained in a structure termed the MHC complex. This causes the T cell to get activated for the first time. After that, the CD4 and CD8 molecules connect to the MHC molecule, stabilizing the entire complex. The first binding of a T cell-specific for one antigen to the antigen-MHC it matches initiates the entire response. This is most common in the secondary lymphoid organs.

Both helper T cells and cytotoxic T cells require a number of secondary signals to get activated and respond to the threat, in addition to TCR binding to antigen-loaded MHC. The first of these is provided by CD28 in the case of helper T cells. This T-cell molecule attaches to one of two APC molecules, B7.1 (CD80) or B7.2 (CD86), and triggers T-cell proliferation. Many millions of T cells that recognize the antigen are produced as a result of this process. The synthesis of CTLA-4 is induced by the activation of CD28 by B7 in order to modulate the response (CD152). Because this molecule competes with CD28 for B7, activation signals to T cells are reduced, and the immunological response is slowed. The activation of cytotoxic T cells is less reliant on CD28, but it does require signals from other co-stimulatory molecules such as CD70 and 4-1BB (CD137).

To generate an efficient immune response, T cells must recognize foreign antigens strongly and specifically, and those that do are provided survival signals by multiple molecules, including ICOS, 4-1BB, and OX40. These molecules are located on the surface of T cells, and their ligands, which are normally found on APCs, excite them. ICOS, OX40, and 4-1BB are not constitutively expressed on T cells, unlike CD28 and the TCR. Similarly, their ligands are only expressed on APCs after the pathogen has been recognized. This is significant because it ensures that T cells are activated only by APCs that have encountered and responded to a virus.

On the surface of T-cells, CD80 binds to the proteins CD28 (for autoregulation and intercellular connection) and CTLA-4 (for attenuation of regulation and cellular disassociation). When CD80 and CD28 interact, costimulatory signals are released, resulting in increased and persistent T-cell activation. CD80’s antagonistic association with CTLAT-4, on the other hand, suppresses aspects of T-cell effector function. These two ligands are structurally identical and compete for the same binding sites. [14] The link with CTLA-4, on the other hand, has a 2500-fold stronger avidity than the one with CD28. This demonstrates that CTLA-4 has a strong inhibitory effect.

CD80 antibody is validated for testing in western blotting, IHC, immunofluorescence, and ELISA. The CD80 Antibody is purified by affinity chromatography via peptide column. CD80 antibody was raised against a peptide corresponding to 17 amino acids near the amino

The terminus of human CD80.

The inducible costimulatory (ICOS) molecule is expressed by activated T cells and has homology to CD28 and CD152. ICOS binds B7h, a molecule expressed by APC with homology to CD80 and CD86. ICOS (Inducible T-cell COStimulator) is a CD28-superfamily costimulatory molecule that is expressed on activated T cells. Inducible T-cell costimulator is an immune checkpoint protein that in humans is encoded by the ICOS gene. The protein encoded by this gene belongs to the CD28 and CTLA-4 cell-surface receptor family. It forms homodimers and plays an important role in cell-cell signaling, immune responses, and regulation of cell proliferation.

Lysosomal-associated membrane protein 1 (LAMP-1) is a protein that is encoded by the LAMP1 gene in humans. LAMP1 antibody is also known as lysosome-associated membrane glycoprotein 1 and CD107a (Cluster of Differentiation 107a). As a result, cells with migratory or invasive activities, such as cytotoxic T cells, platelets, and macrophages, have cell surface expression of LAMP1. LAMP1 and LAMP2 are frequently expressed on the surface of cancer cells, particularly tumors with a high metastatic potential.

Botox Crows Feet Treatment: How Long Does It Take to Work?

What Is A Disability Support Provider And What Can They Do For You?

Can you use regular sunscreen on your face?